The Great Synagogue was doubly hidden.  Its plain plaster walls masked a sumptuous interior.  The ceiling was gorgeous, painted in elaborate symmetrical patterns by the artist Gershon Horowitz in a 1936 renovation.  The chandeliers, gilded and inset with azure, could have graced a palace.  Gold glowed everywhere.  Once, the Great Synagogue may have been even more beautiful than the Choral Temple.  It was hard to tell, as the ground floor was being used to store museum exhibits.  All of them had been on display in the even older Holy Union Synagogue/ Templul Unirea Sfântâ, then undergoing a major reconstruction.  The displays looked amateurish, mostly black and white photographs beside squares of text, mounted on poster board.  Nothing could have been more serious, of course, than what they recorded. 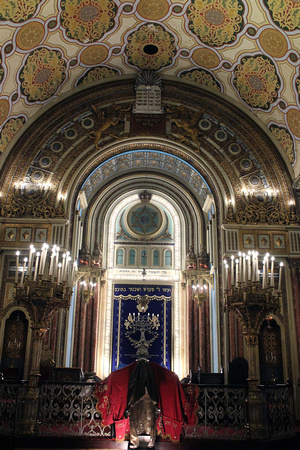 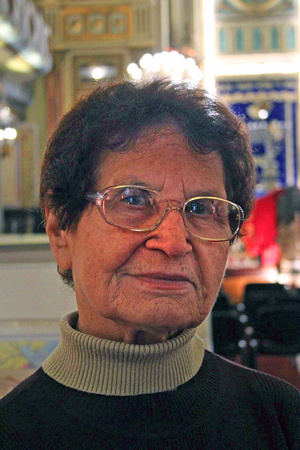 A docent detached herself from a few other visitors and approached us.  She was a tall, dignified woman in a dark suit.  I could not determne her age.  Her name was Hilda.  She knew the history of Romania's Jews thoroughly, as it was the history of her family as well as the nation.  After The War, there were about 5,000 Jews left in Romania, almost all of them in Bucharest.  In the 1920's, there had been about 700,000 Jews, though the country's borders had encompassed more territory at that time.  Bucharest's Jews had been instrumental in the city's development.  Their skills and labor had helped transform the feudal settlement into a modern urban one.

Before The War, there had been forty synagogues in Bucharest, and nineteen Jewish schools.  Now there are only three synagogues in operation.  It is no mean feat for them to continue existing.  Scholars debate the exact figures for the genocide, but 280,000 to 380,000 Romanian Jews were murdered by the Nazis and their auxiliaries.  It is a stupefying statistic, but it does not, alas, represent the greatest number of Jews killed in any country.  That sorry distinction is one for which there have been all too many contestants.