As we approached Bucharest, the countryside yielded abruptly to equipment yards, truck depots and exurban excrescences familiar to anyone who has ever taken a highway into a North American metropolis.  Before the Second World War, Bucharest had been known as Little Paris, owing to its bridges, handsome boulevards, and many buildings in French Second Empire style.  That is not the sobriquet that I should have applied to it.  Bucharest was the East European capital that had been most defaced by the Communist aesthetic.  Under Communism, utilitarian, high-rise workers' housing was erected on the outskirts of the city.  Unfortunately, the regime's architectural program was far more ambitious than that.

Romania's postwar dictator, Ceaușescu, had admired the gigantic modern edifices that he had been showed when he toured China and North Korea.  During the 1970's, he had fine, old neighborhoods in Bucharest demolished in order to make room for his grandiose Civic Center (Centrul Civic).  The dictator's policy of Systematization replaced elegant Nineteenth Century districts in the urban core with banausic, prefabricated concrete dormitory blocks ten stories tall.  These came into view as we passed the city limits, adorned now with the distinctly non-Socialist addition of enormous advertising banners.  They touted global brands and local businesses.  These banners covered much of the upper surfaces of most buildings, and vied in ugliness with the peeling paint and cracked concrete. 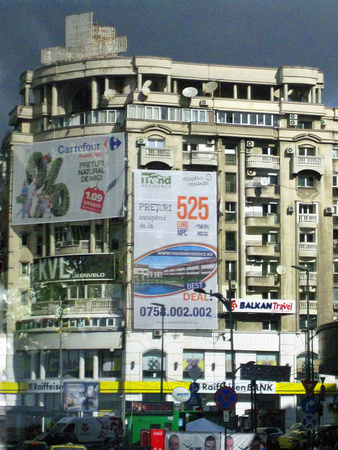 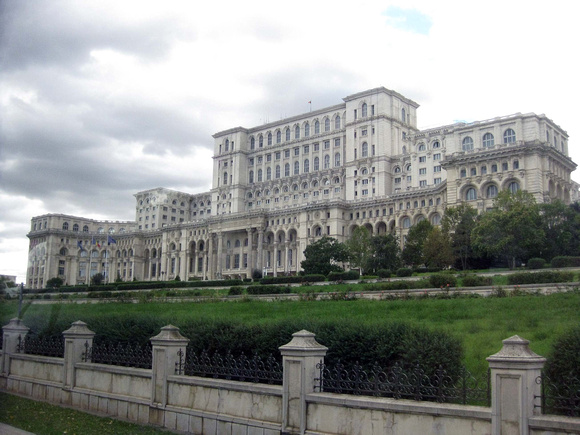 Most of the 1,100 rooms of Ceaușescu's Palatul Parlamentului (Palace of Parliament) remain empty despite its housing the Romanian legislature, three museums and a conference center.