Bucharest was the largest, most densely populated city on our tour, with more than two million people.  It had the fastest pace, too.  Trams lumbered alongside cars and public buses in the heavy traffic.  The sidewalks were full of pedestrians, including bejeaned young people walking in packs.  Bucharest was undergoing an economic boom, and I could sense its intense energy at once. 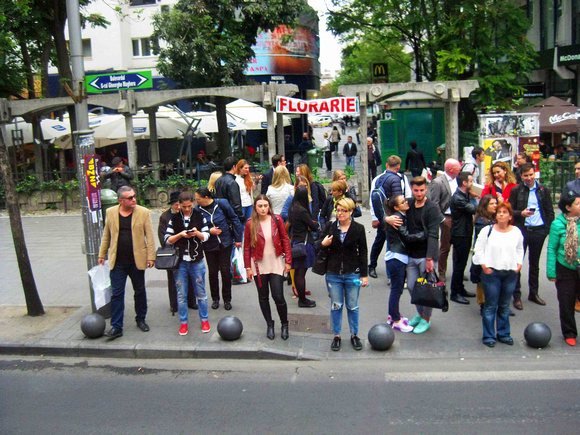 Wars, earthquakes, and oppressive regimes had not disfigured Bucharest, the grande dame,  completely.  Some of the tree-lined boulevards and noble residences remained, though the palaces had been converted into banks, museums, and government offices.  And there were monuments, some fin-de-siècle equestrian bronzes as well as new ones commemorating the overthrow of the Communist dictatorship in 1989.

The strangest of the contemporary monuments was in the heart of Bucharest, in the former Palace Square, now Revolution Square.  It was a pale concrete obelisk about 25 meters tall, skewering a dark, hollow ovoid made of intertwining steel vines.  At its base were stylized figures representing the heroes of the 1989 Revolution.  Its official name was the Monument of Rebirth, but our local guide told us that everyone called it The Impaled Potato.  I had to agree that the resemblance was inescapable, especially if one specified that the potato had been charred.  The monument was erected in 2005.  Long after the revolt toppled the hated Ceaușescu, people still mistrusted official sentiment and mocked it.  There was a splotch of red paint on the monument's shaft that made it look as if the pierced potato was bleeding.  I could not determine if the scarlet pigment was the work of an outraged art critic or just part of the statue. 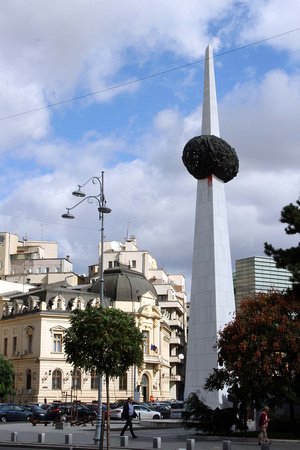