Whatever its artistic or civic merits, the Impaled Potato was an incongruous addition to Bucharest's central plaza.  The space was defined by the Royal Palace, which had become the National Museum of Art, and the University Library, the Athenaeum, and a grand hotel.  All of these were exemplars of Parisian formality.  The square was the place where Ceaușescu
had addressed the citizenry for the last time.  Popular unrest had been spreading through the country.  The army ceased to support the dictator, who fled the capital.  Police, militias, and demonstrators had clashed in the streets, to deadly effect.

Romania had undergone the most violent emergence from Communism of any of the former Soviet bloc countries.  More than a thousand people had been killed in the fighting in Bucharest.  That number became more than a statistic when Radi introduced us to Egmund.  To hear his story, our group assembled at one corner of Revolution Square.   We stood behind the small, brick Kretzulescu Church, a relic from the 1720's.  Our guide referred to Egmund as a hero of the Revolution.  He was a clean-shaven, dark-haired man in his forties.  He wore a Romanian tricolor flag of blue, yellow, and red like a poncho, with a hole in the middle.  Those who had begun defying Ceaușescu had adopted this as their standard, tearing the Communist Party insignia out of the center of the flag. 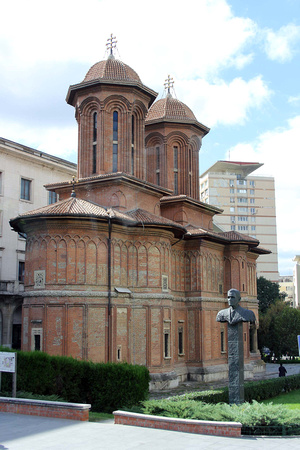 A native of Bucharest, Egmund had been a student during the December 1989 riots.  His friends and he had wanted to fight for democracy on the front lines.  The dictator sent tanks into the streets to quell the revolt.  Ceaușescu had ordered his
security forces to fire on protestors, most of them unarmed.  In the ensuing chaos, Egmund was wounded.  He rolled up his sleeve to show us the scar from a bullet.  His best friend had been killed beside him.  The flag that Egmund had draped over his shoulders was stained with the dead youth's blood.  I stood in silence for a while, contrasting Egmund's narrative with the frivolity of the North American life that I was accustomed to lead. 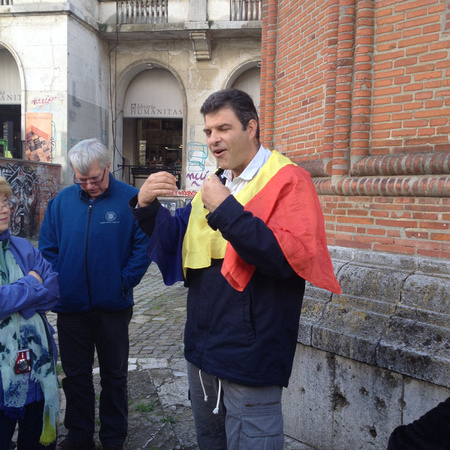