While everyone was questioning Egmund, the hero of the Revolution, HL took pictures of the Kretzulescu Church.  The Orthodox church was distinctive in shape as well as size.  It reminded me of a ship that had docked at the edge of the square, had ships been made of brick.  Its two towers could have been smokestacks.  We walked to the front of the church and peered inside it.  The walls and ceiling were covered in frescoes, as was the porch.  There was a lofty, gilded iconostasis, flanked by the tall, haloed figures of archangels painted on the curved walls of the apse.  The interior was a blaze of gold and vermilion on black.  It was obvious that it was being restored completetly and capably.  I was sorry that I could give the church only a cursory inspecton, but it was time for the group to reboard the bus.

No visit to Bucharest would be complete without a stop at its most infamous place of interest, the colossal Palace of the Parliament.  As the physical manifestation of Ceaușescu's megalomania, it may have earned more opprobrium than mere architectural ugliness might inspire.  Under leaden skies, we saw the Palace's white bulk from afar.  The scale was pharaonic, magnifying the dullness of its design.  Yet I had known far more unsightly, bare modern structures to win the adulation of critics and plutocrats.  Aside from the unsightliness of its proportions, The Palace of Parliament was less of an eyesore than most corporate skyscrapers and au courant beachfront homes. 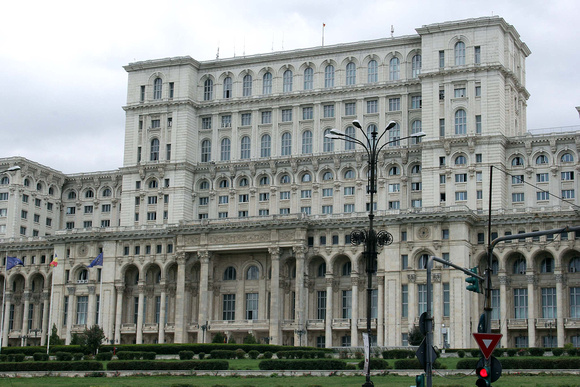 Ceaușescu had meant his to be the ultimate palace, one glorifying The People rather than a reigning dynasty.  His name for it had been The People's House.  Some Bucharesters still may refer to it that way, but only ironically.  Ceaușescu and his wife were executed in 1989, years before the Palace was ready for occupancy.  The first person to address a cheering crowd from the Gargantuan building's central balcony was not destined to be the dictator, but the American pop star Michael Jackson.  The entertainer's knowledge of geography had left something to be desired when, in 1992, Jackson greeted the inhabitants of the city by shouting, I love Budapest!